This report is later than I would like it to be due to the holidays and first of the year activities.

International box office growth remains the fuel in the movie industry growing to $38 billion in 2014.  Asia had the largest growth in volume.  The overall mood at CineAsia was correspondingly very positive.

Like most trade shows, CineAsia centers around an exhibition of products and services.  There was a lot of activity and interest during the exhibition; as always it was a great opportunity to see friends and meet some new people as well.  This photo captures our booth at the exhibition and provides a glimpse down the walkway at the number of people who were there. 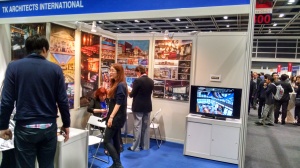 I gave a presentation at the inaugural CineAsia University on Architecture – Using Set Design Principles to Enhance the Movie Going Experience.  Much of the University content was focused on technology and set design was chosen specifically to be non-technical in nature and emphasize the importance of design in the movie going experience.

Three companies showcased products at CineAsia that provide a more interactive cinema experience; they dive right into the heart of the debate that has been ongoing since the advent of the cell phone.  I admit to being a purist, with strong preference for the dark room, no distractions approach that has been the model for decades.  But the auditorium is not a private room, and that is part of the appeal – the shared social experience with the rest of the audience.

Younger patrons today seek a different shared social experience, and the friction between this generation and the traditional movie going experience is clear.  Nielsen reports that during the first three quarters of 2014, Americans aged 12 to 24 saw 15% fewer films in theaters compared to the same period in 2013. In 2013, the number of frequent moviegoers between the ages of 18 to 24 fell by 17% according to the Motion Picture Association of America.

Movie going has lost a lot of its social currency with the younger generations. It has also lost a lot of its social appeal. The younger generation wants to share the experiences they are having with not only the people they are with, but also with their social media friends. You’re currently not allowed to talk, text or post on social media at the movies.

These technologies offered a glimpse into ways that we might engage this generation and get them to return to the movie theatre.  All are currently utilized in theatres.  They might actually evolve into a different movie going experience or at least as an alternative or supplement to the experience.

The following is some information on each company and their approach.

Movie theaters are trying to go interactive again, with Audience Entertainment and Screenvision debuting interactive technology in theaters across the country.

Since Sept. 12, customers of 100 Screenvision theaters have been part of the first wave of participants in the company’s interactive Dimension (iD) technology, which through a pre-show presentation allows audiences to physically participate in the content on the big screen.

The remainder of the article can be found HERE

The Christie Experiential Network is about enhancing the movie going experience beyond the auditorium. 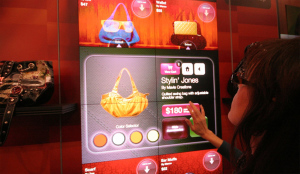 They are providing next-generation digital media experiences that create a unique opportunity for brands and studios to truly connect with today’s media-savvy consumers.  You can read more about it HERE

You can read more about their system at: http://timeplay.com/business/

All three companies seek to either enhance or provide an option to the movie going experience, not replace it.  As such I am encouraged by their development and will be following their results.

One of the first sessions at CineAsia was a panel discussion hosted by the International Cinema Technology Association.  It is a favorite of mine because it includes the points of view of exhibitors and studios.  I will leave you with the words of exhibitor and studio executives that were part of THIS article in the Hollywood Reporter.

One of the important things that are going to drive the development of the exhibition industry is the social experience of watching a movie in a crowd, said panelist Brian Hall. “How do people interact socially these days? They interact with [a mobile phone]. So their lifestyle is driven by their social media habits and the friends that they have, and the biggest change we can positively drive in this industry both on the content and the distribution side and on the marketing of that content in cinemas is to work together to find ways to engage our crowd in their social media environments around our content,” said Hall. “And I think if we do that really well, that will make the biggest change in the cinema industry in the next few years.”

But innovation will continue to come, no one knows where it’s going to lead, said Sunder Kimatrai, Executive Vice President, Asia Pacific, Twentieth Century Fox International “Some technologies and innovations lead to lasting improvements and product offerings, and others fail. It’s important and inevitable that the industry continues to evolve and innovate, and if something does work and something doesn’t stick, it’s all about offering new experiences to the consumers,”