The Young Generation and Future of Cinema

One of the common themes at the CinemaCon in Las Vegas this year seemed to be addressing the issue of decreasing cinema attendance of the young generation. It has become a challenge for filmmakers and exhibitors to involve those born right before and after 90’s due to various reasons (Patrick Von Sychowski).

According to 2014 Theatrical Statistics Summary (Complete Report Can be Viewed Here) by Motion Picture Association of America (MPAA), the share of moviegoers under age 50 has slowed down. The amounts of tickets sold for ages between 18-40, as well as per capital by same age, has continued to decrease over the years as well.

What may be contributing to these alarming trends?

First reason of a possible decrease in movie attending is rapid technology development. The millennials are constantly bombarded by the technology, and seem to be living in an almost virtual digital world, surrounded by the social media and phone apps, where any film, games, communication and other entertainment options are readily available at just a tip of your fingers. “They can access anything, anyhow at any time. They are learning faster, they are multi-taskers… It’s an ‘always-on’ generation” (Patrick Von Sychowski).

The millennial developed in the middle of a technological age and that makes them far different than the Boomers and even Generation-X. A filmmaker and exhibitor should understand the difference and make certain adjustments perhaps in HOW the film is presented to which target groups.

A second factor a cinema exhibitor may need to pay attention to would be financial influences. The millennials were born and raised during the recession years, and have learned to be more careful with extra spending money. A lot of them have been struggling with unemployment and extremely high education loans, leaving them cautious about spending their extra funds on entertainment and cinema-going, especially with so many internet and technology options readily available in the latest years. Some choose alternative film watching options or other forms of entertainment, such as at-home movie streaming and shows that TV has to offer.

We hear that TV still plays an integral part of the media mix, no one can refute the scale of its reach to general consumers. However, the evolving relationship between this all-important millennial audience and the TV in their bedroom or living room means that the big Screen and second screens are increasingly proving their worth ahead of their allocated media spend and as a critical part of the media mix.

So what can motivate one to get off of his or her couch and move on to viewing a film on a big screen?

This is where spectacular design comes into play.

A general advice we heard at CinemaCon was, “Partner with them {newer generation} – move incrementally towards them. When you get to know this generation, work with them, they will share the experience they want to have. Listen for possibilities. Co-create an experience. It’s good business practice (Patrick Von Sychowski).

The multiplexes that offer a variety of entertainment options may be the newest trend that most cinema owners are going with. Arcades, gaming and entertainment seem to be well accepted especially by the younger audiences who come to the theaters to socialize and for recreational purposes. From bowling to photo-booths, and indoor amusement machines, simulators such as the one pictured below, seem to keep the customer satisfaction higher and allowing a tenant to spend more time and money at the facility, as well an increase in returning customers. 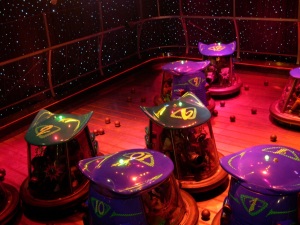 In-theatre dining, is yet another option. It works for the young families limited on time and cash, who often have to choose between a dinner and a movie or families seeking an alternate activity together with their kids. So, why not have both available at the same place and location. A variety of options, from in-theater dining with food brought to you directly into the auditorium to upscale gourmet restaurant or bars and cafes available on the premises, there are a variety of choices that can be offered to a young movie goer. 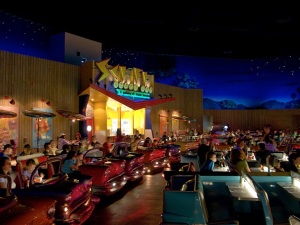 And then, of course, being in tune with the developing technology is yet another strong trend. Many younger moviegoers come to the cinema with friends to socialize before, during and after the film. A lot of times the movie goers prefer to stay in groups, and are constantly connected to the larger web of friends through digital devices, smart phones, social media and applications.  A typical cinema, however, risks becoming an alienating experience for this generation just by asking them to turn off their electronic devices and seat quietly without interaction during the entire length of a film. So, perhaps not only social media (such as instant responses on Twitter), but cinema phone applications become an excellent way to keep the modern audience engaged and connected, and a good tool to provide feedback to the exhibitor to the audience’s likes, preferences and desires. It is important not to turn the younger tech-savvy generation away and keep them engaged and included, while not sacrificing the general movie going rules and regulations, which may be a challenge of its own.

A good example of successful application to this approach would be theater chain Cinemark that has been successful in offering users rewards in exchange for their promise to turn off their phones with help of Cinemark App/CineMode during a movie. This App is a good way of getting younger movie goers stay more engaged without obvious technological disruptions during a movie.

Virtual reality, combination of new technological tools, and new unique experiences, such as 3D, 4D that are not available at home or elsewhere, may be other ways of attracting the younger audiences to the audience.

Millennials and the post-generation Y know what they want, when they want it, and where to find it. Along with online and mobile viewing of social content, it is also important to look at the role that cinema plays in the social lives of millennials as a regular fixture in their calendar. “They like to be told stories, stories that make a real impact and stories that they can pass on and talk about to their peers. This applies to all their media consumption, but is especially relevant when it comes to cinema…” (MediaPost). And this is something we need to tune to.

“Millennials and the post-generation Y know what they want, when they want it, and where to find it.”

All of us involved in the cinema industry should stay connected to the audience and learn to adjust to new desires and expectations. And there is definitely hope that the upcoming brand new generation of post-millennials will breathe the life back into the movie-going attendance statistics. MPAA is pleased to see the positive increase in the total share of young moviegoers under 18. This fact promises a positive outlook at the future of cinema going.

All of us in the movie industry need to be alert and prepared to the wishes and preferences of the younger audiences to stay current. After all, nobody knows what trends the newest generation will adopt…