Observations from the Middle East

As I have just finished my first trip to the Middle East, I want to share observations – about the place, the people and the architecture.  Tamra Knapp and I are attending the first ISBE expo in Abu Dhabi.  The United Arab Emirates is likely the most international location in the Middle East and the most comfortable for a westerner. 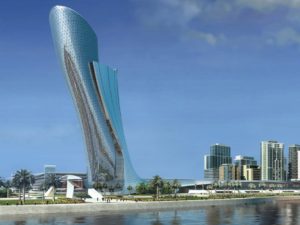 We arrived in the early hours of Monday morning.   The first observation was at the airport.  The majority of the customs agents were women, of course dressed in the traditional Hijab.  This was the first of our perceptions that were changed as a result of our travel.  We made our way to the Hyatt Capital Gate Hotel quickly and efficiently which is the most leaning building in the world.  Yes, more than the Leaning Tower of Pisa; designed that way rather than the results of settlement.

The taxis at the airport were all minivans – for people with luggage it was a welcome sight.  After a late start we set up our booth for the expo.  The weather in October was a pleasant 30 degrees Celsius. I misunderstood the directions and we walked a Las Vegas block in the wrong direction; in the heat, dragging the trade show bag.  What a great start.  After that we had the afternoon free and asked the hotel for suggestions to explore Abu Dhabi.

They had several suggestions including shopping, and a desert experience.  After that walk neither of us had interest in the desert so we opted to tour the Sheikh Zayed Grand Mosque. 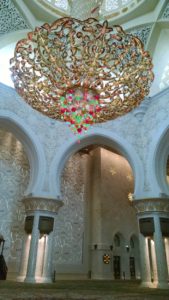 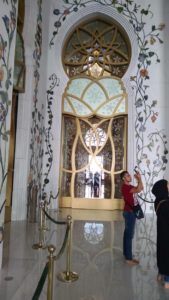 What a facility and what an experience.  The grounds were meticulously planned and maintained and you enter the Grand Mosque via a processional covered walkway.  The processional walk places you in the proper frame of mind.  Before entering, there are benches and cubbyholes for you to take off your shoes.  The entrance has the largest sliding doors I have ever seen – with gold metal and patterned glass and a sinuous shape.  It is a Grand entry to a grand space.

The main space is majestic, ornate and superbly detailed yet not overdone.  The floor is luxurious and comfortable and the path you are to follow is clearly indicated with ropes.  There are no plane surfaces; the walls are textured with a geometrical pattern but all the same color so that they do not overwhelm the space.  Ceilings are punctuated by the domes which provide the uplifting, inspirational quality of light.

I could go on and on about the features of this space, but others have done a great job of describing it:

Abu Dhabi Things To Do

By the time we left I literally felt inspired and full of admiration and respect for the people that share this fantastic experience with all. We caught a taxi and asked him to show us the sites, and did he ever.  In a little over three hours we saw the Yas Marina Circuit, Ferrari World, Yas Waterpark, the Emirates Palace and several masterful works of architecture. 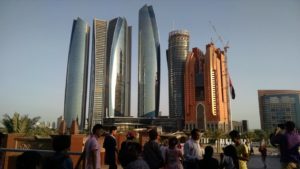 The initial ISBE expo was small and not as well attended as anticipated.  The organizers worked very hard to make it the best possible experience in spite of the attendance.  We met several new people and learned a lot about the state of the movie and cinema business in the Middle East.  The expo ended as the Abu Dhabi the Film Festival was starting.  Several key industry figures are attending both events so the program participants were very well known.

Since the expo coincided with the start of the World Series, we missed the first two games, but returned in time to watch the next three and will be attending the 6th and hopefully 7th games here in Kansas City Royals.  Let’s go Royals.