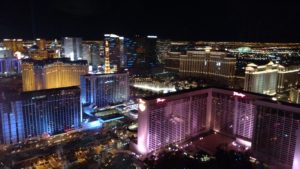 Vegas Strip Views from the Cinemark event at the LINQ

The highlights of the annual CinemaCon Convention in Las Vegas that was held March 20 to 27, 2017 can be summarized as Movies, Movie Stars, Strong Results and Bright Future.

The primary highlights of each CinemaCon gathering revolve around movies and movie stars.  This year was no different.  Previews of upcoming attractions build positive momentum for exhibitors and allow them to begin planning promotions and special events targeted to specific movies.  Full length screenings of movies, such as “Pirates of the Caribbean: Dead Men Tell No Tales” (In Theatres May 26, 2017), which CinemaCon screened this year, and also had an unannounced screening of “Furious 8” much to everyone’s delight. 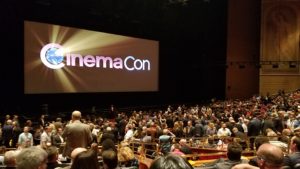 Close to 3,000 participants are gathering at CinemaCon to hear the industry presentation

The opening ceremony set the tone for the week it is always one of the highlights of the convention. 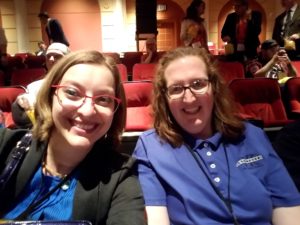 When the opening trailer at the welcome session to CinemaCon 2017  leaves you going, “Huh, who knew a Subaru 4-door sedan could be a viable contender in a sexy high speed chase?” (Baby Driver, being released in June ’17)  it is probably a good sign of things to come.  The prevalent message throughout Cinemacon was that the industry is strong and growing.  The excitement for growth is great for our clients, many of whom we enjoyed seeing through-out the week.  Here are some of the highlights we learned throughout the show:

John Fithian’s state of the industry address on Tuesday set a positive tone for the whole convention.  Box office sales showed growth for the 8th straight year (2.3% growth from the previous year).  Ticket prices today when compared and normalized against inflation are less than they were in 1976.  Strong content both this year and last year have been the drivers for this growth.  March crested the billion mark for the first time in history with Beauty and the Beast kicking it off.  Spring with Furious 8 looks to continue this growth and this summer promises to be very busy at the Box Office with Guardians of the Galaxy 2, Valerian, the Mummy and many more.  Followed up ending the year with Jumanji: Welcome to the Jungle.  One of the surprising announcements that generated a lot of buzz was the announcement by Media Mation that the Chinese Theatre is reseating their entire auditorium to be MX4D seats after their recent reseating and renovation in 2013. 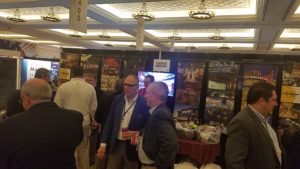 Quite a bit of discussion occurred about VR and whether the patron experience is compatible with moviegoing.  There seemed to be two distinct approaches to VR:  Social or individual.  IMAX debuted an individual pod that brings the movie experience into the Lobby to expand the content and experience.   Others displayed VR sets where you can watch ones friends interact with the movie world.  This motif has even crept out of the theatre as there was a VR Gallery storefront down the street in the Linq shops.  TK sees interesting ways to integrate either of these two approaches to VR into projects.

Contrary to popular media that may portray millennials as not attending anything as traditional as a movie theatre, the Box Office numbers soundly refute this.  According to Fithian, 55% of movie goers are millennials which represent a 16% growth in that age group from the previous year.  40% of those millennials attending movies are influenced by more premium options whether that is large format, beer & wine or recliners.  These added features weigh heavily in the decision process for where millennials choose to spend their money. 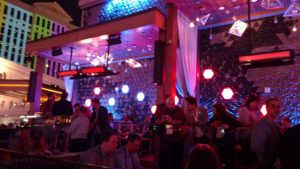 Not only are millennials attending movies but diversity within the audience is also increasing.  Hispanics made up 21% of the domestic Box Office, while Asian Americans grew to 6.1 % and African Americans grew to 4.1 %.  One of the interesting things noted at CinemaCon was that for the first time, an international film made the top 20 of the worldwide Box Office.  Even though the global box office showed increase, the UK was damaged by Brexit.  In some cases, due to the value of the dollar, the local growth was positive but when converted to dollars the number did not appear positive.  The NATO worldwide membership now represents 65,063 screens across 7,119 locations in 91 countries. Sr. Principals Jack Muffoletto and Mike Cummings attended International day on Monday and thought many countries were represented there.

The future is bright, in part because of the North American demographics mentioned above and the ongoing global growth of both movie content and exhibition. 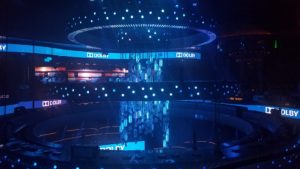 Innovation was in evidence as always at CinemaCon.  A collaboration from Samsung and GDC to create a flat LED projection generated a lot of discussion.  Laser projectors were more prevalent than rarity as they have previously been.  Being architects, we are always intrigued by tools that help us serve clients better.  One of those tools we are looking forward to implementing is Harkness Screens new revit content.

Whether you want to embed yourself in a car chase through VR or watch the movie in luxury from a recliner while sipping a beer the cinema industry is zooming forward into a bright future.  We enjoy designing those spaces and helping you to achieve the engaged, social experience for your patrons.