Around the World in Ten Days

“OBSERVATIONS FROM BEIJING AND JEDDAH”

Departed on May 1st from the US and arrive in Beijing the evening of Tuesday May 2nd.

Wednesday morning, I went to the joint venture office in the Vantone office tower. During the morning we reviewed designs for cinema projects for China Film and Perfect World and exchanged preliminary information about the business meeting. We were joined by Tianyu Liu, one of the first people that I met in exploration of the China market. I had not seen her in nearly a year as she has been on maternity leave.

During the business meeting we reviewed our list of projects. Most are in the design and negotiation phases, but it seems to indicate that the market for cinemas in China remains strong and we will be very busy later in the year. We also talked about interoffice work and how we can improve the process and several business issues related to budget.

I had dinner Wednesday night with Wu Yan (Rachel) and Tianyu at a restaurant near the office and hotel. It was an entire feast of Chinese food (as most dinners there are) including Peking duck.

Thursday was mostly a work day. Everyone had stuff going on so I just tried to catch up a bit. There was a dust storm; it didn’t look much different than the pollution, but you could tell it was different because the guys at the hotel kept getting out towels to clean off the cars.

Thursday night dinner was with all five people from the Beijing office.

Friday morning, Wu Yan, Dong Yi and I went to Perfect World Cinemas to present the contemporary American style cinema design we did. We were joined by three from our partner A/E company that got us involved in the project (we do design, they do documents). The design was well received; it is a small existing location with bad auditoriums and they want to explore changing the configuration to see if it can be improved. They are an interesting company. They just entered the market last year when they purchased an existing cinema group. They have a film studio – Perfect Pictures; they also have kid’s education and games as a large part of their company. The GM decided to assign us another larger project where the space might exist to more fully explore other elements of their brand. The GM is very interested in laser tag as well. There was less dust that day but more wind; I thought that Yi was going to fly off when we got out of the taxi at the Perfect World office.

Dinner Friday night was dumplings with Yang Qian (Vicky) and Yi. My flight to Jeddah departed at 2AM Saturday so I returned to the hotel and packed and went to the airport. I flew Emirates for the first time through Dubai to Jeddah. Maybe I would get to see a sand storm there?

Both flights were late and I had to really hustle to make my connection in Dubai. I got to the gate after almost everyone was on board and as I made my way to my seat towards the back of the plane I noticed that almost everyone was wearing white garments. I learned as we left the plane that they were all pilgrims on their way to Makkah and were wearing Ihram as is traditional. 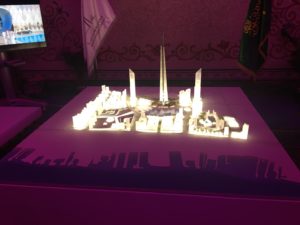 A model of a City of Future – Jeddah, Saudi Arabia (with the tallest building in the world in the center- 1000m high)

I finally arrived in Jeddah about 9:30 AM Saturday. Our partner, Rayan met me at the airport and took me to the apartment and helped me get checked in. There is a little “grocery store” next to the hotel and I bought water and instant coffee, so we were all set. That afternoon I had lunch with him and a few of his friends – Jackie who works for him in Dubai, Alex from Germany, and his uncle Mohammad Alawi. During lunch I found out that Rayan grew up a few miles from where I now live in KC and he went to Park College (at the time), where he met TK’s Irina Kobzeva. Rayan has dual citizenship in US and Saudi Arabia. It turns out that his uncle is the chairman of Red Sea Mall Company which has the largest shopping center in Saudi Arabia. TK Sr. Principal Jack Muffoletto arrived late afternoon on Saturday.

The RECON conference started Sunday May 7th. There was very interesting information and lots of friendly people. The opportunities here in the market are huge and now supported very much by the leadership. There is a Saudi 2030 Vision campaign that the government is undertaking to diversify the economy beyond just oil and gas, with retail and entertainment as significant components. Virtually no one that lives In Saudi Arabia vacations here – they all go somewhere where there are more options for leisure -reported to be some $23 billion USD annually.

During lunch we met Bandar who works for a large eyeglasses retailer with more than 100 locations. We found out that he attended the University of Texas at San Antonio, and had a lot of very nice things to say about his time in America.

We were prepared to Uber to the first day of Recon however a taxi saw us and stopped and so we got in. The set-up is very similar to the Dubai Recon. The talk here is all about growth. They need a lot in Saudi, the economy has been poor, but is starting to come out of it, The government is investing in the growth and the growth will begin soon. It seems that when you mention cinema, people are not laughing anymore. We have met a few new people. Rayan’s uncle is planning an expansion at Red Sea Mall which will include cinema. The initial use of the space will be an event space that can be converted to cinema.

It was a very long day. Rayan got us invitations to the dinner at 20:30. 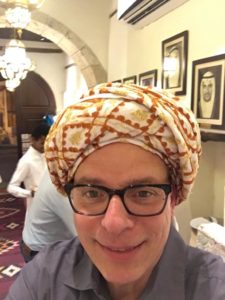 The dinner was hosted by Red Sea Mall, and Uncle Mohammad Alawi. He is very personable and an engaging host. I have definitely figured out that everything is later there. Most things start around 10 AM. As I said, the dinner was at 20:30; turns out that was the start of the reception/socializing portion. They had a program that included recognizing some of their tenants and a cake cutting ceremony. It took eight people to bring in the cake and there were fireworks happening in the background. It was in a beautiful room and a great time, and then we went downstairs for dinner around 10.

Everyone in retail is starting to plan for the change in law that will permit cinemas and our timing in being there was great.

The programs during Day 2 on Monday were pretty good. One was a TV Host from Dubai who tells a great story; he would always be a storyteller no matter what era he lived in. An afternoon session included him and a very popular radio personality talking about social media. The same ones as in the US: Facebook, Instagram, Snapchat.

A video of the conference is posted here:
https://youtu.be/-MJBW6bEuFI

We managed to get in front of all of the obvious people at booths and met a few more by accident. Overall the seminars were interesting:
• Threat of e-commerce, cause for more F & B and entertainment
• Retail opportunities at Makkah
• Saudi women in retail is improving
• VAT is coming, 5% to start
• Kingdom Tower mixed use development. Huge, 1000m high tower (will be tallest in the world and is currently under construction) 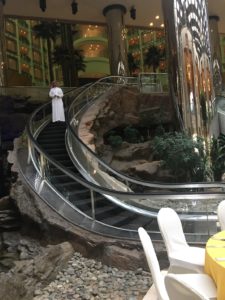 At the end of the conference we were approached by Eng Wail Bakhair, general manager of a shopping center who invited us to go on a tour of a historic old downtown Jeddah site that is a UNESCO world heritage site. We met at seven and there were 8 of us – 2 US, 2 Filipinos, 1 Swiss, 1 Italian, 1 Canadian, and 1 Saudi. David Macadam from ICSC (the Canadian) was on the tour. We first got a tour of Wail Bakhair’s shopping center which is in the downtown center and then walked through the more commercial part of the old city.

We then met our tour guides and walked through a lot of the old town heritage site. It is not so commercial, and is in serious need of repair. Most of the homes are more than 100 years old and at least one is 800 years old. Only a few have been renovated. Many of them have a dozen or more inheritors and they struggle to agree on what to do with the property. We saw a restored one that serves as a museum. Multiple floors and made of coral stone from the Red Sea. The first floor includes a modest sitting room for the man and his friends. The much larger family sitting room is on the second level. 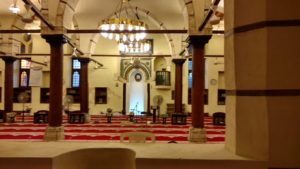 The tour culminated at an historic open air mosque. It is believed to be 800 years old and they discovered a foundation beneath it reported to be 1200 years old. There is a glass “well” where you can see the foundation below the floor.

As we finished the tour, the assistant guide asked if it was my first time to Saudi Arabia (it was) and he was interested in my impressions. I told him that the climate and environment were very much what I expected; I was pleasantly surprised by the people that were much different than what you hear on the news. Almost everyone is always smiling. 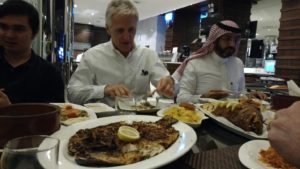 Enjoying the seafood feast at Jeddah, 2017

A real memorable night. Got back to the apartment after midnight.

Since we had concluded our meetings and investigations, my office arranged for me to return a day earlier (hence the change in title from eleven to ten days). The Saudi Airlines flight to Paris was great. Once in Paris I had to pass through security, change terminals via bus, but encountered no difficulties. My flight to Atlanta was delayed about an hour which began to concern me about my connection. Once we boarded the plane, they discovered an electrical problem that took two more hours to fix so a total delay of three hours. I would arrive in Atlanta after my flight home departed. But Delta booked me on the next flight to Kansas City and after a rush through baggage claim and recheck, customs, security and the inevitable tram ride from one end of the airport to the other I walked up to the gate as they were boarding premium. The flight home was uneventful and on time.