It’s not easy being green … or is it?

“It’s not easy being green”. We grew up with those famous lyrics from Kermit the Frog.  Or at least I did.  If you don’t remember Kermit the Frog or Sesame Street, I highly recommend you google it and listen to the lyrics.  It is kind of catchy.

Whether or not you have heard the lyrics, we seem to have carried this mantra into our adult lives, especially when it comes to green design and construction.  There are many misconceptions about the difficulties of green building, especially in theater design.  But when you look at the big picture it actually is not as difficult or expensive as it appears to be.  In fact there are some real benefits to being more environmentally friendly.  Being environmentally mindful can help cut operating costs, improve staff retention and morale and help drive in new customers, yet very few theaters have started to implement green strategies into their day to day operations.   Want to experience some of these benefits?

Here are some simple tips to help your theater start to become greener. 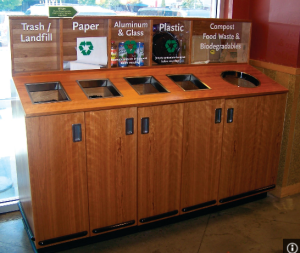 Recycling Bins in a restaurant setting

I know it sounds like a lot of work, right? How do you force patrons to recycle their popcorn bucket after a movie?  There are a lot of things you can do to start like putting co-mingled recycling bins in the auditoriums and putting up posters advertising the initiative.  While this won’t force patrons to recycle, most people will do it when given the option.  Studies have shown that 80% of Americans consider themselves environmentally conscious (by Green Restaurant Association).  By giving patrons the option of a composting bin, a co-mingled recycling bin and traditional trash bins in the auditoriums and letting them know they are there, you have a much higher chance of getting people to participate.

There are several advantages to recycling.  There are the typical benefits to the environment listed by the EPA such as conserving natural resources and reducing the amount of waste sent to landfills.  Depending on your local waste hauler there could also be financial benefits for your business.  According to the Green Restaurant Association, recycling can lead to fewer trash pick-ups which could lead to a reduced hauling cost.  Some jurisdictions even give monetary incentives to companies that participate in recycling.  Check with your local government and local haulers to see what incentives are available to you.

A little over 2 years ago, my favorite NFL team, the Kansas City Chiefs, began a new recycling program including putting co-mingled recycling bins throughout the stadium.  They found that waste diverted from the landfill went from 11% to 44% and they are continuing to expand on that program.   An NBA team, the Portland Trailblazers, was able to eventually divert 80% of waste from the landfill partially by installing recycling bins throughout their arena. Think of how much simpler it is to recycle in your theater than in an 80,000 seat football stadium or a 20,000 seat arena.  If they can do it, so can you!

There has been a lot of hesitation toward LEDs, mainly because it is a new technology and getting them to dim properly in an auditorium was difficult.  In the past few years there have been amazing advances in LED technology.  I know LED lighting seems expensive at first glance, but the cost savings long term is incredible!  Luminaires can last 25,000-35,000 hours compared to an incandescent lasting 1,500 hours.  Imagine not having to pull out lifts and change out bulbs in the auditoriums every other month for 10 years.  You save the cost of replacement bulbs over 10 years and now you have also nearly eliminated a safety hazard for you and your staff.

You can also experience significant energy savings by using LED bulbs.  According to Green America, an LED fixture that puts out the equivalent light of a 75W incandescent bulb only uses about 20% of the energy.   LED fixtures also put off less heat which means less wasted energy.   You are also taking some pressure off of the HVAC system which means you pay less to cool your building.  Bottom line – while LEDs may have a higher initial cost, they last 20 times longer and are 20% less expensive to operate saving you more time and money in the long run. 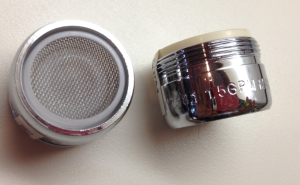 You can save a lot of money on your water bills by doing some simple things to help lower your water consumption.  Some ways of doing this are simple and cost effective.  For example, you can install new aerators on your faucets that will help lower the flow of water.  Aerators are inexpensive to buy and easy to install.  You can replace any older toilets or urinals with newer, more water efficient versions.  Toilets installed prior to 1992 were allowed to consume 3.5 gallons of water per flush.  Newer, more efficient toilets only consume 1.6 gallons per flush or lower.   This equals a significant cost savings on your water bill.  Use energy star appliances where available in the concession stand for an added benefit.

So as you can see, it’s not so bad to be green.  It can actually be an asset to your theater.  In the end we all should look at it like good old Kermit the Frog.